Civilians in the Civil War

When someone mentions Civil War reenacting most people think of soldiers and battles. The 140th New York also shows how civilians participated in, and were affected by, the Civil War. Not all of the men of the northern states enlisted as soldiers; many stayed home to run the family business or farm, to care for elderly parents, or young children (if their wife had died), or because of age or poor health. Although a few women disguised themselves and fought as soldiers, most stayed home to keep house and raise children and, if their husband had enlisted, to try to get along as best as they could without a mans help.
​
Many of the men and women who stayed home were eager to 'do something' to assist their local regiment. Ladies Aid / Soldiers Relief groups were formed in cities, towns and villages throughout the North, meeting to make, collect, and send food and other supplies to 'their boys'. The Sanitary Commission and Christian Commission were two larger groups that also provided goods and services for the soldiers. Groups formed to assist the soldiers widows and orphans, as well as to promote Abolition, Temperance, and Woman's Rights. Some northern civilians did go south to help. Agents for the Sanitary and Christian Commissions travelled to the military camps to help distribute the supplies that had been collected back home and to try to improve the living conditions in the camps. Some civilians worked as cooks, nurses and attendants in the military hospitals. The army hired civilians to work as laundresses, teamsters, and contract surgeons. Newspaper reporters and artists kept the public (and sometimes the enemy) informed of the latest news from the front. Sometimes soldiers relatives would come to help take care of a wounded soldier, or take his body home for burial in the family graveyard.

Civilians were affected by the war in many ways. For every man who went to war, many friends and family members were left behind to wait and worry, and do whatever they could to support their soldier. We try to show some of these aspects of civilian life in the 1860's by learning about and accurately portraying the lives of those men, women, and children.

We take pride in our authentic appearance and behavior at reenactments and living history events. Being as accurate as possible in the way we dress and act is our way of showing our respect and sympathy for the people we are trying to portray. We expect our members to spend time learning, doing research, and sharing information with each other. To help our new members get started, and to keep all of our members updated on new findings we offer seminars and workshops on such diverse topics as open hearth cooking, clothing and hairstyles of the 1860's, 19th century etiquette, popular dances, games and amusements of the mid 1800's, authentic sewing and needlework, etc.

One of our goals is to educate the public about the lives of the northern civilians during the Civil War. We make presentations to schools, scout groups, civic organizations, and other clubs, as well as doing 'Living History' presentations with our military members at various historic sites and parks thoughout western New York.

Our group is made up of women and men of a variety of ages and backgrounds; social workers, stay at home moms, high school and college students, engineers, clerks, nurses, electricians, teachers, farmers, and retirees, to name just a few. What we have in common is an interest in the lives of the 'ordinary' people who were affected by the Civil War, and the willingness to work together to develop historically accurate, respectful portrayals of these individuals. We always welcome new members. Our group is family oriented; we encourage parents to join along with their children. One of the most significant aspects of this hobby is friendship. When you work as part of a team to put together a meaningful presentation, and share a meal and a few laughs around a campfire, a unique bond is formed. Our members have made many new friends across the country and each event reunites us again.
Become a Member 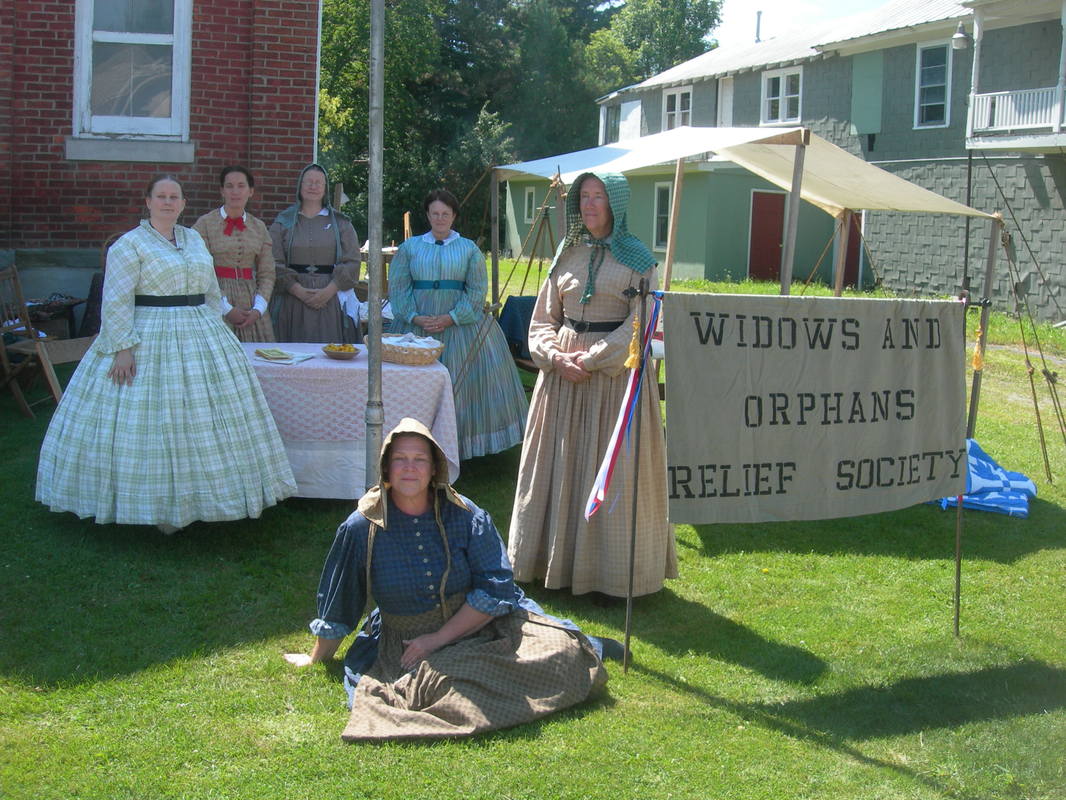